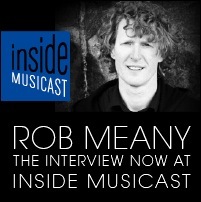 "Beautifully arranged jazz-pop that offers an urbane, sardonic wisdom that's beyond the reach of most mainstream acts today."--Jason Warburg, The Daily Vault
"Think Steely Dan with an edge. Great pop tunes with a flavor of jazz and rock..."--TwinCities.com

"Titled Four Blocks To Hennepin, the sophomore album is a piano- and horn-driven effort full of tight, poppy harmonies and instrumental jams that could light an incense stick."--Chris Reimenschneider, Star Tribune

Jay Gabler, Local Current Blog, 89.3 The Current (KCMP) --"This shimmering collection might be recommended to fans of Marshall Crenshaw, XTC and chamber pop."

The band Terramara, fronted by Rob Meany, offers their third album with, once again, pop/rock songs that satisfy the heart and the mind. “Dust & Fiction” is, however, more catchy than the last album “Four Blocks To Hennepin" (but not in the sense of simpler). The vocal melodies seem even more perfected, harmonized and sophisticated. There are, again, some similarities to Neal Morse, whose first solo album was also very poppy. The catchiness or commercialization (how ever you want to see that) goes so far that the band even permits themselves with "Screaming At The Pouring Rain" to sound like pop-era Genesis, while “Blue Revolution” quotes unconcerned Ben Folds and Billy Joel with a trace Queen in the guitars. Songs such as “Solar Meltdown” (marvelous chorus), the modest “All That I Am”, “Burn Me Up” (again, marvelous chorus) or "Fall In Love Again" (and once again marvelous chorus) should perhaps be enjoyed without thinking about who has influenced them. “Dust & fiction” should, might, must leave a lasting impression. 8.5 stars out of 10.

"Terramara return in 2008 with Dust & Fiction (digipack), which shifts away from the Steely Dan style and toward XTC. At times Terramara could be the American equivalent to older English progressive pop bands such as Stackridge, 10cc, or City Boy, with their quirky art-pop of Beatles lineage. With Terramara, the progressive aspect comes from the keyboard-centric arrangements, the clever harmonic twists and turns, lush harmonies and layered sound. Simultaneously intelligent and incredibly catchy, they might just single-handedly save pop music."

From the get go, Minneapolis-based Terramara’s Four Blocks to Hennepin conjures up late ‘70s pop nostalgia. The kind of music the period’s heyday produced through bands like Steely Dan, The Doobie Brothers, and the Atlanta Rhythm Section. The period where jazz and fusion made inroads in the rock music scene.

The playing on this album is very tight: crisp guitar leads, compelling bass lines, choice keyboard fills, steady drumming and warm vocals. The songs are extremely accessible to a wide range of listeners, and if the LA-sound of the late 70’s comes back in vogue, each and every one of these songs could become a chart topper. Favorite Track: Track 5, “Invisible People”.

Fronted by singer/keys man Rob Meany, and rounded out by the crack team of Erik Pederson (bass), Karl Koopman (guitars, synth), and drummer Dave Thomas, Terramara purvey their funkified space-jazz influences through a glimmering sheen of pop perfection, and it’s nice to see a band that’s so revered live lay down a batch of their songs in the studio (in this case, The Terrarium, natch!) that remain this true to their original spirit. Other standouts here include the rolling, hypnotic grooves of “Rise & Fall,” which finds the outfit employing a harder-edged guitar sound; the dreamy neo-jazz vibes of “Smoke And Mirrors” (which is kind of a bizarre example of what a love-gone-wrong song co-written by Joe Jackson and Sting—when he still had enough soul to get up and make fun of himself with Frank Zappa on stage—might sound like ... once again, that’s a good thing); and the timely, tongue-in-cheek synth-fest, “Virtual Lisa.”

All in all, a tightly knit, soulful batch of fresh material from a local outfit who have the “Urban Sound of Minneapolis” down to the proverbial “T.” Just toss the album’s final cut (and title track) in your personal or car stereo, and drive, walk, run, ride a bike, a bus or on a friend’s back down Hennepin Avenue—you’ll soon discover why Terramara are so qualified to provide your daily soundtrack. Great stuff! Terramara play the CD release show for Four Blocks To Hennepin on Fri. May 20 at the Fine Line, get more info at http://www.terramara.com.

If you thought the parting of Spymob meant there weren't any good Steely Dan-loving bands left in town, then you obviously haven't heard the new Terramara CD. Titled "Four Blocks to Hennepin," the sophomore album is a piano- and horn-driven effort full of tight, poppy harmonies and instrumental jams that could light an incense stick. Terramara's singer-keyboardist Rob Meany has a smooth yet powerful, Sting-like voice (much like Spymob's John Ostby), and his songs such as "Running Down the Avenue" and the title track feature guy-lost-in-the-city themes. Tonight's CD-release party at the Fine Line, a 6 p.m. early show, will include a horn section with Matt Darling and accompaniment by Greazy Meal's Ken Chastain, who produced the album. ..

Sometimes the hype that gets attached to bands verges on the hilarious. "They're the new Rolling Stones!" "She's like Britney Spears, but with talent!" "If you crossed Pearl Jam with a three-eyed, seven-toed, accordion-playing monkey, you'd get this band…" Etc. That makes it all the more notable when a band actually lives up to its billing.

Judging by the press I've read on this group, critics seem to think Terramara sound like the second coming of Steely Dan, with a little Sting in the vocals. And damned if they aren't just about exactly right.

On their sophomore full-length, this Minneapolis, Minnesota quartet lays down some of the most sophisticated, tasty jazz-pop on record since the Dan's heyday, full of tight keyboard-based arrangements, precision playing and rich harmonies.

The Steely Dan comparison extends beyond keyboardist-vocalist Rob Meany's compositions and the group's careful arrangements to guitarist Karl Koopman's nimble, tasteful fretwork, heavily reminiscent of Larry Carlton's career-making stint with Steely Dan in the mid-'70s. The beauty is that, despite the many similarities, this album never sound like a rip-off or a cheap imitation. Rather, it sounds like a musically accomplished band whose chosen niche just happens to be the same one as a well-known precursor.

In terms of specific musical moments that make this album special, I'd point to these: the clean, full vocal arrangement and steady rhythm of opener "Running Down The Avenue"; the delicate funk, sweet horn section and call-and-answer vocals of "Crying Shame"; the hyperactive bass line and soaring chorus of "Black & Grey"; and Koopman's fluid, jazzy solos on "Rajasthan" and "Freedom." As for the Sting thing, it does sound rather like Mr. Sumner's work when Meany holds some long high notes toward the end of "Rise & Fall," though a fair bit of Bruce Hornsby is also evident in his delivery on these tracks.

The element that makes this disc stand out from the crowd, though, is the aura of sophistication the music carries throughout. The playing is crisp and precise, the production equally so. As with Steely Dan, this makes the moments when the lyrics grow incisive stand out that much more. "You're cool, your friends think it's funny / Thick shades cuz the forecast is sunny / You think twice that it's all about money / Don't you think someone could love you?" sings Meany in "Running Down The Avenue," and the question lingers to the very end.

Four Blocks To Hennepin is forty minutes of snappy, beautifully arranged jazz-pop that offers an urbane, sardonic wisdom that's beyond the reach of most mainstream acts today. And it marks Terramara as a group that bears watching -- and listening to.  RATING: B+

Here is a band who doesn't seem to venture outside of their home base in Minnesota, although the rest of America, if not the entire planet, should give them a listen. Very eclectic jazzy pop-rock, at times reminiscent of Steely Dan, The Police, XTC, and Joe Jackson, while possessing a uniqueness about them. Perhaps the strongest point of Terramara's music is how infectious it is; with an emphasis on melodies, grooves and fine-tuned yet completely natural sounding arrangements, not to mention superb musicianship and production, there are no "filler" spots to be found on Hennepin.

Kicking off with "Running Down The Avenue", the band immediately takes charge, with a start/stop verse leading into a bouncy chorus. The horn section is employed on "Crying Shame", a funky blues number vaguely resembling a mythical Stevie Wonder/Tower Of Power collaboration. "Rise And Fall", "Wooden Man" and "Invisible People" continue to make full use of creative dynamic approaches to verse/chorus construction, which is an important aspect of Terramara's sound.

"Black And Grey" and "Freedom" are the easiest two tracks to compare to Steely Dan: complete with horns, rhythms, and some tasty guitar work. "Outrunning Headlights" features only Rob Meany on piano and vocal, delivering a performance that's equal parts Ben Folds and Billy Joel. The funk-rocker title track follows, which then segues into a bonus track: a slow, spacey, repeating instrumental piece that builds into a multi-layered electronic orchestra.

Four Blocks To Hennepin is highly recommended to anyone who enjoys out-of-the ordinary pop-rock music.

Funky pop-rock that has a great notion of vocal harmonies, Terramara is part jazz and part Maroon 5. Recognized as one of the top 15 acts in the Midwest via DiscMakers Independent Music World Series in 2003, Terramara continues to live up to that accolade by writing domineering pop-rock songs. Their lead vocalist is what separates them from the rest of the pack as his rich vocals are sugar coated with melodies and harmonies that even accomplished vocalists only dream of—or only are able to hit with the help of a million-dollar studio.

Light and steady, Terramara arrives in Duluth this Saturday with an Uptown beat. They are Steely Dan cool with a jazzy pop Sting slickness. Mixing various styles and lyricism into an easy to listen to album titled, Four Blocks To Hennepin (Redhead Productions), they end up with a full sound and many facets.

Terramara was started by Duluth native Rob Meany (Lead Vocalist, Songwriter, and Keyboards) in 1998. The current lineup consists of Karl Koopman (Guitar), Dave Thomas (Drums), and newcomer Erik Pederson (Bass). Four Block To Hennepin is for the listener that wants to chill and take in some quality city inspired music. The tune “Rise & Fall” has a Sting quality complimented by a steady piano beat keeping tempo. The song soars in the chorus becoming modern and utilizing harmonies. “Wooden Man” is softer and really goes into an eighties sound that seems a bit dated. As the disc plays through the songwriter begins to emerge. When you get to “Invisible People” there is an observation of the homeless with Rob singing, “Can you see them on the avenue? Begging for change with an empty shoe/there but for the grace of God go me and you.”

“Smoke & Mirrors” is light jazz with an intimate twist. We enjoy a long instrumental that feels Steely, but has a bit more bite as it fades out. Another style that pops up is in “Outrunning Headlights.” This one had Randy Newman optimism with nice lyrics and a good hook.

The entire album is based on an artist’s view of the city and feels like a foreign take on a strange land. Terramara emulate the city, and try to become part of it with their album. You can almost hear the cars driving by and see the homeless begging for some change at some points. Listening to the album is like taking a trip to the cities, and walking in another man’s shoes. Take a trip with them, and save on gas by going to Luce.

Terramara - Four Blocks To Hennepin, full-length album (2005)
Recorded at The Terrarium in Minneapolis. All songs by Rob Meany. Produced by Ken Chastain. Mixed by Rob Genadek.